I'm recently back home from a week in Wyoming attending a funeral of a family member.  Randy was killed in a tragic accident that took his life at age 53.  Though he didn't raise all of his kids due to divorce and adoption, he did eventually have a good relationship with each 5 of his children.  Luckily each had their own good memory of their dad with a fond visit or a hunting, camping, fishing trip.

In preparation for the funeral, old family photo albums, digital cameras, and cell phone pictures were all perused, enjoyed, and discussed as the search was underway for meaningful pictures to display on poster boards for all to view.  That endeavor elicited lots of memories, laughs, and tears.  Four large posters were assembled and placed on easels at the funeral and luncheon which followed.  The flowers were beautiful, the 2 daughters who spoke delivered sweet stories of their dad, the church ladies provided an abundance of food for all to enjoy.

For myself, always thinking of family and photos, it was especially touching to see the value each person placed on pictures of themselves with their dad/brother/son/grandpa.  However, as the week progressed, one son came to the sad realization that not even one picture existed with just himself and his dad.  As more pictures were discovered each day, he was hopeful and searched diligently to no avail. How could that be?  They had had a relationship for many years and had a number of trips together, including fishing in Alaska.  Two days after the funeral and the final day of Jeremy's stay in Wyoming, more photos were discovered.  Not in anyone's camera or phone, not in an album or framed.  Just 4 months previous Randy had visited Jeremy, taking several dozen pictures with his camera.  He actually had those pictures printed and they were found in plastic baggies in his dresser drawer.  Among the pictures was a 4 x 6 print of Jeremy and his dad!  The discovery brought shouts, laughter, and tears of joy.

Trip to Wyoming: hundreds.  Cost of a funeral: thousands.   4 x 6 print of son and dad: priceless. 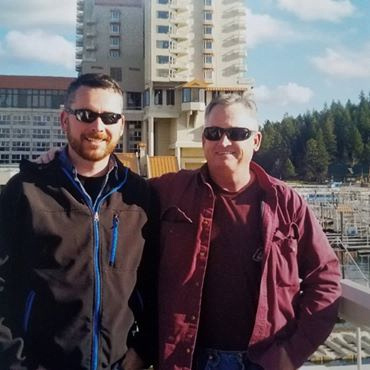